Ettadhamen, a Molenbeek in Tunis. From here even Syria looks like an opportunity

Dar al-Kitab, on avenue Bourguiba, is one of the best bookstores of Tunis. A favourite for expats, because it has a whole shelf of books about Islam and democracy. But among local readers, the most popular books are rather those on the shelf nearby: about suicides.

This is the country where it all started. Where on December 17, 2010, street vendor Mohamed Bouazizi, 26, set himself on fire after the confiscation of the fruit and vegetable cart he had been making a living with since he was 10, fatherless, and the first of five children. His self-immolation crushed President Ben Ali, and all Arab world: and today the main street of Sidi Bouzid, his home town, is named after him. But that’s the only difference. Over the last five years, the unemployment rate doubled from 14 to 28 percent – and true figures, as usual, are even higher: because salaries are hardly enough to earn a living. And so the true figures, here, are those of the twenty-somethings you see on a roof, suddenly, on a cornice, on an electricity pole: ready to committ suicide, suicide like Mohamed Bouazizi, because in the end, as they reply to those, down on the street, who try to stop them, “in the end we are already dead.”

We think of suicides, and we think of jihadists. Of terrorist attacks. And yet in the Arab world, today, these are the suicides.

We think there is hatred, here. And instead, there is mainly desperation.

“Now the watchword is national unity,” I am told by Sami Ben Gharbia, one of the co-founders of Nawaat, the collective blog that was a hotbed of the revolution. “But in the end, it is just a sophisticated way to say that stability, rather than change, comes first.” The coalition government that keeps together Islamist and secular parties, indeed, this renowned government that turned Tunisia into a role model for all Muslim world, saved the country from the fate of Egypt, or worse, of Syria; but it also slowed down reforms. Stuck into an endless transition process. Because it is not a matter of lack of resources. Since 2011, Tunisia has received 7 billion dollars of international aid, and the IMF has now granted a further 2.8 billion dollars. It is a matter of corruption. Ben Ali’s circle controlled 25 percent of the economy. And nothing has really changed. Last September, a controversial amnesty law was finally passed, and all old corruption charges dismissed. And that’s why demonstrations, here, actually never stopped. Not by chance, the current protests didn’t start on the 14th of January, the anniversary of Ben Ali’s fall, but on the 3rd of January, the anniversary of the first true uprising, the 1984 Bread Riots. The movement is called: Fesh Nestannew?, What are we waiting for?, and its rallying cry is: Down with the budget.

It echoes the famous 2011 rallying cry: Down with the regime. But now protests target subsidy cuts and privatizations, the tax increase and the public service hiring freeze. And that’s why according to most activists, there won’t be any new revolution. “It’s not only because we are more experienced, now, and more aware of how tough is the challenge,” says Sami Ben Gharbia. “It’s also because overthrowing a regime is much easier than setting up a new, different system.”

Cautious words. That sound judicious. But empty as well, outside Tunis. Or just in Ettadhamen, which is actually 20 minutes away from the city center, but it’s a bit like Molenbeek, in Brussels: it is a different world. A world of small, concrete homes; and nothing else. It has 200,000 people, and two shabby, criss-crossed streets with repair and kebab shops. Retailers of second-hand washing machines, rusty blenders. Formica furniture. The most luxury brand, here, is Carrefour. In a try to halt the latest wave of protests, President Essebsi, who is 92 in a country where 40 percent of the population is under 24, came to open a youth center. And for Ettadhamen, it’s been the first visit ever of a senior state representative. A boy looks at me while I take notes. “Ettadhamen is not like this,” he says. “A few days ago, the streets were cleaned, the lampposts fixed. All the garbage taken away. And Essebsi showed up, and opened this center with a bunch of chairs and books. But you can’t eat books,” he says. “And here we are hungry.”

Because in the past, Tunisians left for Italy. They left from Zarzis, in the south. Near Djerba. The nearest departure spot. Along the sea, on the beach, you walk, and you still see shoes. Shoes, and ships’ remains. But now Italy is going through a deep economic crisis, too, and at best, you’d find work in tomato fields. Or in drug dealing. And so over the last years 27,000 Tunisians opted for quite a different destination: the several jihads of the world. Roughly 6,000 of them have actually become foreign fighters, and 900 are now back. Or more exactly: 900 are in jail. Many others just sneaked home into banlieue like this. Where a few meters away, in the meantime, a TV crew films a group of teenagers high on hash. “Because if you were fully awake,” one of them says, straight in the camera, “you would set yourself and everyone around you on fire.” 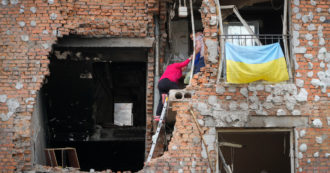