“Call me Mohammed. In the end, for you we are all the same. If you are Muslim, today, you are only a Muslim. Rude and violent. Everything else, what you think, what you are, doesn’t matter. If you are Muslim you are just dirty.” Mohammed, honestly, is the last name that would come to my mind: because we are in Sarajevo, and this guy has blonde hair, and is waiting for me at Tito café, a café that looks like a squat, beer and Blur’s songs. He has a hoodie and a book of Asimov, and blue New Balance shoes. You would say he is just back from a 5-a-side football match. Instead he is just back from Syria. He is 26 years old, and he is one of the 330 Bosnians who’ve joined Isis. Or perhaps he is not. Perhaps he is not in the Europol list, because he fights with a group which is affiliated with Isis, but formally is not Isis, and because our statistics, by the way, are only tentative, nobody really knows how many foreign fighters are: nobody even knows who they are. Because the caliphate, true, in theory is a universal caliphate, it bulldozes old borders: but it is actually deeply influenced by national backgrounds. If in Syria Isis is often seen as a lesser evil than Assad, in Iraq it basically voices the thirst for revenge of the Sunnis, who were in power with Saddam and feel now marginalized by the country’s Shia majority.

And if in Libya it is a matter of militias and tribes, a few miles away, in Tunisia, it is rather a matter of poverty, with young men leaving for Raqqa as once they were leaving for Italy: looking for a job. The caliphate claims to be universal: yet it changes country by country. Jihadist by jihadist. And so the Mohammed I am in front of looks all but the same of the other Mohammed I’ve come across so far. Bosnia has 3.8 million people, half of them Muslim, and some small mountain communities apply illegally the sharia law. Husein Bosnic, a cleric accused to be Europe’s main recruiter of jihadists, now in jail, lives in Sarajevo. Most of the guns used in the Paris attacks were smuggled from here. Still, the true war of Mohammed is not Syria: he was born in 1990.

“I barely remember my mum,” he says. “She got killed by a sniper when I was three. I grew up with my mother’s mother, a slim, little woman, who was talking to herself all the time. All the time black dressed. And my father – I don’t know. He was a typographer. Then he turned to alcohol. He said that it was my fault. That I was a spoiled child, that that day I absolutely wanted some sweets. That else, my mum would have stayed home. I left as soon as I could. But I think he is still alive”, he says. “Or maybe he isn’t.” At some point, Mohammed got in trouble with the law. A couple of brawls, a theft. And he moved to Syria. “Because I was always on drugs. Because I was becoming like my father.”

A third of the 330 Isis Bosnians has criminal records. After more than a hundred thousands dead, the war here ended in 1995 with the Dayton agreement, that tried to strike a difficult balance among ethnic groups. Today Bosnia is divided into two entities, the Muslim-Croat Federation and the Serb Republic. It has a rotating presidency, with five chairmen, a new one every eight months, it has three parliaments, three governments, 136 ministers. 127 political parties. The hunt for jihadists is in the hands of 22 different police corps. The unemployment rate is 43 percent, and youth unemployment is the world’s highest: 63 percent. “But even if you get a job, it’s useless. You don’t make a living,” Mohammed says. “The average salary is 450 euro. What kind of future you can have, if you don’t have a present? I needed a path, a direction. But it’s not a mystical thing. In the end I went to Syria for your same reason. We both struggle to stop this war, right? I was watching all these videos of blood, smoke covered kids, lost in the dust, and I thought: I was like them. I was exactly like them. I don’t want they become like me. Only, you believe in words, I believe in action”.

The Bosnians who’ve joined Isis belong to two types. The fiftysomethings, veterans of the 1990s wars, who often serve as trainers: and their sons, more or less, twentysomethings grown up amid the rubble of the former Yugoslavia. Between drugs and poverty. Mohammed, yet, hasn’t joined Isis, but a different jihadist group. “Honestly, basically it depends on whom you are in touch with,” he says, “because you need to be introduced by a member of the group. And so it’s not really a choice, it’s quite random. But I wouldn’t join Isis. It’s ruled by Iraqis, by officers who were once holding top positions. You feel like a pawn, I don’t know, there are too many power games. Lots of energy goes wasted into settling old scores. While I think this is the time to build,” he says.

“Our priority, now, is the sharia law.” Something that for Mohammed, in a nutshell, means order. Respect for authoritativeness, yet, rather than authority. “A society with no rules can’t work. A society where everyone decides what’s right and what’s wrong, where everyone is his own God: it can’t work, because in this way, actually, there are rules anyway, just invisible rules. The rules of the strongest.” Infidels, he says, are not non-believers, but dis-believers: and that’s the worst danger. “Because you think you don’t have a religion, you think you don’t believe. Instead you believe in the world as it is.” And the world as it is, he says, “has no room for me.”

“My guide is the Quran. The Quran must be studied, understood, applied. Not just memorized. We are not reciters: we don’t parrot words. The Quran must be mastered. Because ruling, driving a society as driving your own life, is a matter of wisdom, of thought: not of numbers. What about Hitler? Wasn’t he elected by the majority of Germans? And Milosevic? If they could, the Serbs would vote again for killing us all. Why should I believe in democracy? It’s a tough moment, but we are not in crisis. At all. Because our reasons are not in crisis. Quite the opposite. The more we are under attack, the more it’s clear what a world with no values looks like. A world in disarray, where everything is allowed. The more Assad is strong, the more we are strong“. “By the way – this interview is a waste of time,” Mohammed says. “I know that for you I am just nut. But who you should be more worried about, someone who tries to stop war and injustice or someone who keeps on getting a tan while dead children run ashore? The one who really needs a psychologist, here, is not me.” 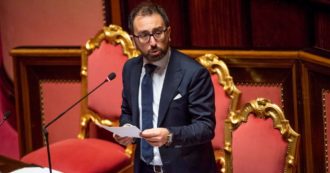