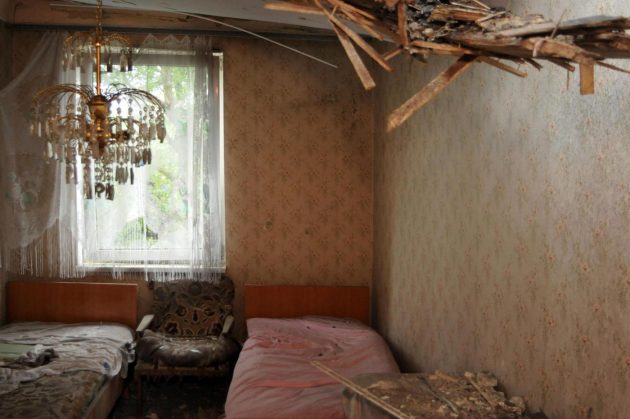 Donetsk is the last holdout of MIG-16 fighter jet in a display in a residential area. Reporters/LaPresseOnly Italy [AUGUST 19, 2014]

And so I realize that no one in Europe has any clue where Riga is. In Iraq, probably. Near Ramadi. Or perhaps in Syria: it’s near Palmyra. Everybody believes I’m on the Riga frontline.

At the European Union summit on the Eastern Partnership, that is, on our relations with the countries on our Eastern border, everybody is more European than us, Europeans. The foreign secretaries, the officials, the activists of the neighboring countries, who dream of membership, or at least of an association agreement, at least a smile, a handshake, are here talking of values with shining eyes, lofty words. They quote Altiero Spinelli, they talk of democracy, of freedom. Human rights. We reply with technique and economics. With standards to be met, debts to be contained, tables, indices and percentages. Or more simply, just giving a shrug.

Because our Eastern neighbors are the troublesome ones. They are six: Armenia, Azerbaijan, Belarus, Georgia, Moldova, Ukraine. And behind them, sometimes above them, actually, over their head, in shape of rockets and mortar fire, there is Russia. That in the past years turned from ally into problem, recaps Carl Bildt, the Swedish mastermind of the Eastern Partnership. “And it’s now turning from problem into adversary.”

And maybe it’s because I arrived here straight from Baghdad, maybe it’s because on my way to the airport a man was kidnapped, just like that, kidnapped while waiting at a red light, another one was killed, maybe it’s because when you arrive from such a place you would just like to stay alone for a while, to stay on your own and nothing else, because in this side of the world, you know it, you’ll come across people who argue, who hate each other for no good reason, who get disheartened for no good reason, and they never have the courage for anything, they delay, and delay and delay, and retreat: and it all looks like an unforgivable waste of life and beauty – but here in Riga, really: I wish they could all come with me to Aleppo. To Gaza. Or just to Slavyansk, since we are here to talk of Ukraine: and Ukraine is the most pointless war I’ve ever found myself into. The war where I was scared the most, truthfully. Even though it’s nothing, compared to Syria: it’s artillery fire, it’s nothing compared to barrel bombs, to street fighting.

But fear is a matter of the mind. You must believe in what you are doing. You must be certain that the story you are covering is worth your life. Else, fear will overwhelm you. And in Aleppo, honestly, in Gaza – yes: you are ready. But Ukraine is a pointless war – an invasion, actually: where on both sides of the frontline, there are only oligarchs. You have this kinda feeling that Ukrainians have nothing to do with it: there’s no East against the West, no Sunnis against the Shia, no Christians against the Muslims. Only oligarchs. Oligarchs everywhere, competing for oil and gas while Ukrainians get warm with coal.

And Putin has already won: because his goal wasn’t conquest, was destabilization. His goal was turning this anarchy into normalcy. Crippling Ukraine.

This is isn’t war. This is Putin’s view of peace. And yet here, of course, even though it’s all about Russia, it’s forbidden to talk of Russia. Because the Eastern Partnership, launched at the time of the Eastern enlargement to allow countries such as Poland, Hungary, Romania, to keep their connections with the former Soviet Union area, for Putin is simply an undue interference into his own backyard. And so in theory we are here to take the stock of the situation: but so far the only achievement of the Eastern Partnership has been the invasion of Ukraine. Exactly what we can’t talk about: because one third of our energy supply depends on Russia.

And so we are here: but still trying to get why. To talk of what. The EU mobilized hundreds of diplomats, analysts, advisors. Random opinion makers. Enlisted countless journalists. All hotels of Riga have been booked, thousands of canapés have been piled up, thousands of wine bottles have been uncorked: all the salmon of the Baltic sea has been confiscated. And while the world outside, all around, boils over, we drag ourselves from one meeting to next. From one cocktail to next. And whatever the topic under discussion is, whatever the statement is, the preamble never changes: “This is off the record, of course” – because it’s all confidential, here, all whispered in your ear as you are getting revealed who knows what key secret you’ll win the Pulitzer for: and they don’t realize that you are taking notes just because you are well-mannered, instead, and also, because you’re given every time a new notebook, honestly, and this cool blue pen with the yellow stars: but you throw everything in the first bin you come across. Because nobody, here, ever says something remotely notewhorty.

And I think of the activists I met in Kiev. Those who wanted Europe despite the European Union, actually, despite the euro. Despite economics: because they were all afraid to end up like Greece. Subject to Germany. For them, for those who are waiting outside, Europe is first of all democracy. It means freedom, reforms. And there is all their strenght, here, in Natalie Jaresko, their minister of Finance: a resolute, steadfast woman. Meticulous. A woman with countless projects, boundless energy. But while she works, while she tries her best, more than her best, for her country, while activists struggle, and Ukrainians get killed, and for no reason, get killed in the dozens under this pointless artillery fire, we spread cream cheese on canapés. We talk of something else. Cowardly.

They are a mess, they don’t deserve Europe, I am told by a EU official. I would like to reply: True, they deserve something better than us. We don’t even know the names of our capital cities. Our Europe is only the Maastricht criteria.

The final declaration of the Riga summit reaffirms “the sovereign right of each partner freely to choose the levels of ambition it aspires to in its relations with the European Union. It is for the EU, then, to decide on how to proceed in these relations.” And of course everybody is sovereign in his dreams, at least, the Guardian correspondent comments. And he sums up the 13 pages of the final declaration in one line: “The European Union reaffirms its commitment to declare its commitment toward its affirmations.”

Outside, a handful of elderly ladies demonstrate against war and capitalism. “Milan was set on fire for the opening of the Expo fair,” an official says sadly. “Here we have only three retirees. Be it said off the record… but we matter less than organic vegetables.” 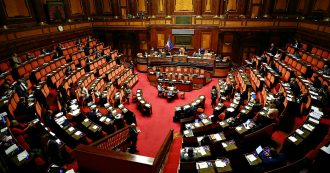