Ahed Tamimi, the video of her interrogation worths more than any opinion

Ahed Tamimi, the video of her interrogation worths more than any opinion

In the end, it is a scene that, like all of you I guess, I have seen countless times. In a movie or in a tv series. An interrogation. With the detainee, a policeman who is nice and a policeman who is rude, instead. Who is tough. The usual trick, isn’t it? Good cop, bad cop, in this office that looks like any other office, with a bulleting board on the wall and all the files and folders scattered across the desk. The coffee paper cup. And yet the one in the middle, now, is Ahed Tamimi. And I have never seen something like that.

She is 16 years old, 17 now, actually, and probably you don’t even remember her. Because that’s the way it goes, with this kind of stories, they are a lot, from all over the world and they are all the same and today there is a Palestinian activist jailed, tomorrow a Turkish reporter or an Egyptian lawyer and the news is quickly replaced by the news of the following case. Ahed Tamimi is the teenager with blonde, curly hair and light eyes who was arrested for slapping an Israeli soldier. In December. “Assault to security forces”. She has been sentenced to 8 months.

Like many journalists, I have been in the West Bank all January to cover her story. Because it is not only her own story, actually: it is somehow the story of Israelis and Palestinians today. With Israelis in hysterics: because Ahed Tamimi reminds them of a daughter, of a granddaughter and debunks (doesn’t it?) their rhetoric of Arabs as terrorists. But also with the world expecting a new Intifada and Palestinians, instead, critical, or sceptical or unresponsive: because that smack is useless, they say, or is self-defeating, or is not so significant, if you think about it, is not so special and, by the way, what’s the point? They say. Getting jailed for a resistance that has no leader anymore. No strategy amymore.

For more than an hour, she sits there: and she doesn’t change expression. She is 17 and she is alone against Israel. And she doesn’t even change expression. And really. I have never seen something like that. Never. It blows you away. And it is also because of that background. Of that office. Which is really an office like any other. And those policemen, who are really two policemen like any other. And they clocked in, in the morning, and in between some paperwork and the next they bullied a bit a teenager; and then (eight hours later) at the end of their shift, they just clocked out and they went home. And it’s the banality of evil, yes. But welded to the banality of indifference, too: with all those Palestinians, in January, who were calculating what is useful and what is not. And how much. With that sort of cynicism disguised as realism. As foresight. But in the middle, now, there is Ahed Tamimi. Who is 17 years old and doesn’t give a fuck if it’s useful: because first of all, it’s right. And she sits there.

Her father was tortured so heavily, once, that he was into a coma, her mother limps because she has been shot, the army killed two of her uncles, arrested half of her family and right before that smack, her cousin, too, had fallen into a coma, with a bullet into his head, but she sits there: and doesn’t even change expression.
And she blows you away. More powerful than any Hamas rocket. There, simply, unmoved, totally focused on what is right while we focus on what is convenient. And you watch the video and suddenly, you feel like you are watching History. But history as it will be watched in a century, as it will be judged: and you see yourself in the middle, when you, too, were trying to understand, to analyse, so reasonably, you were trying to weigh, to ponder the useful and the useless and you told yourself that you were wise and instead, the truth is that you weren’t brave enough, that’s it, because what else do you need to understand?

I have been there all January. Why I didn’t slap a soldier, too? And now, the many soldiers who patrol our lives? 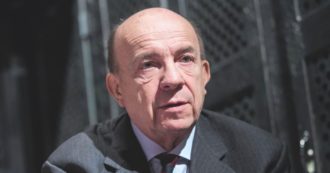